This article has been published, in part, in Buddy Magazine and Southwest Blues Magazine in 1997
updated 12/30/2018

Texas blues man "Blind" Lemon Jefferson was one of the most significant recording artists of this century. He was the first commercially successful blues man. The first. Before Lemon, blues was "ladies" music. Mamie Smith, Bessie Smith, Ma Rainey, and other lady blues singers first popularized the form, but it was with other people's songs and backed by a small band or orchestra. Lemon came along playing a guitar, accompanying himself, and often singing his own original compositions. Mr. Jefferson was popular in the Deep Ellum area of Dallas long before it became the hip and trendy place it has become today. Sam Price recommended him to a talent scout and Lemon was "discovered" by Paramount Records in Dallas, Texas. He went on to record numerous sides for Paramount between 1925 and 1929 in Chicago, Atlanta, and Richmond, Indiana.

Lemon is at the very root of American blues and therefore rock and roll. Nearly every blues artist that has come since has been influenced directly or indirectly by his recordings, whether they know it or not. His death in 1929 was mysterious and remained unexplained for many years. Some stories said he froze to death, others that he died of a heart attack, others that he was robbed and murdered. After many years and much mystery, the death certificate of  "Blind" Lemon Jefferson was found in 2010.  It was published in the Frog Blues and Jazz Annual #1.  Interestingly, he was listed as GEORGE Jefferson, probably because the information on the deceased  was provided by his land lady in Chicago, Emma Jackson.  His occupation was listed as BLIND and birthplace as Dallas, Texas (also incorrect).  Place of Death is listed as "in the street 3700 block of Rhodes Avenue".  Cause of death "probably Chronic Myocarditis". His body came home by train from Chicago in December 1929 and he was laid to rest on Dec. 29, 1929 in Wortham, Texas.

Lemon's resting place remained unmarked until a group of blues fans arranged the placement of a metal Texas Historical Marker in 1967. There were still people alive back then that remembered Lemon, and could point out the general area where he was laid to rest, but not the exact spot. Living Blues #83, p. 24 -25 has a nice article summarizing the dedication of the marker in 1967.

In July 1996, a blues fan visiting the old cemetery posted a note to the blues-L discussion group (an Internet discussion group for blues fans) stating that the cemetery was in disrepair and the historical marker needed sprucing up. 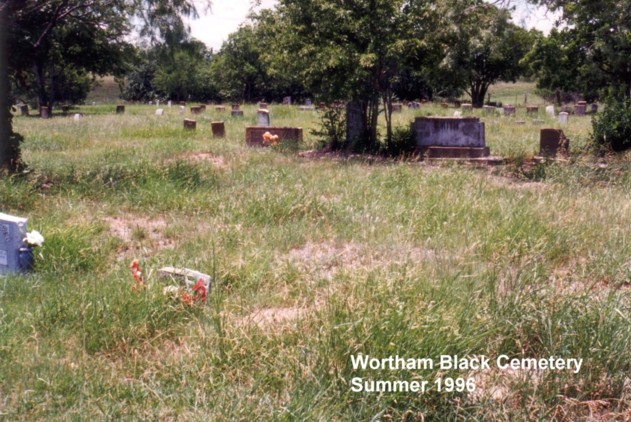 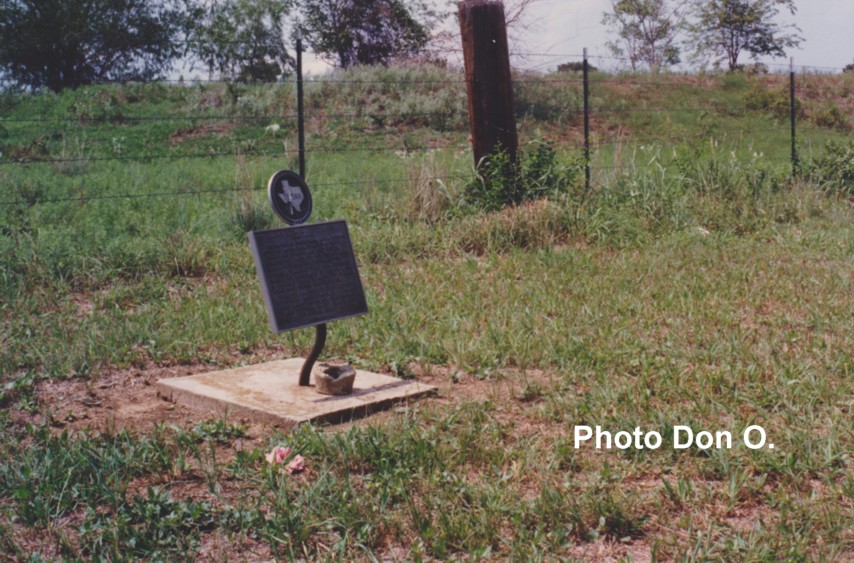 Bruce Roberts in Austin contacted Casey Monahans at the Texas Music Office and he set the wheels in motion to repair the state marker. Bruce also suggested raising funds to place a granite marker and set up a bank account and began to solicit donations through the Internet blues group. Jeff Seale set up an internet website with photos of the cemetery and an overview of the project. Robert Morgan (father of Blacktop Records blues artist Mike Morgan) provided an introduction to Sandra McCown, owner of Hillsboro Monument Works, a major supplier of headstones and engraving services in north Texas. A fan of Texas music herself, she offered to provide a nice headstone, engraving, and set up, at cost.

By December 1996, enough money was collected to pay for the headstone, plus make a nice donation to the Wortham Black Cemetery Association, the caretakers of the cemetery. Big checks from The Scandinavian Blues Association (in Sweden) and Tradition/Rykodisc Records (who had recently re-issued some of Lemon's music on CD), pushed the fund over the top.

Bruce Roberts visited the State Archives and the State Historical Commission where he found census information suggesting Lemon's date of birth was in September of 1893. This differed from the 1897 date on the state historical marker, but since no documentation or justification for the later date could be found, it was decided to use the 1893 date. Bruce summarized his research in an article in Blues & Rhythm #119, p.4 & 5. Work on the stone began in December of 1996 and it was completed in early 1997.

On February 6, 1997, the new marker was placed at the gravesite. Bruce Roberts presented a check for the balance of the fund to Joe Butcher, President of the Wortham Black Cemetery Association, caretakers of the cemetery.    A summary of the headstone project can be found HERE. 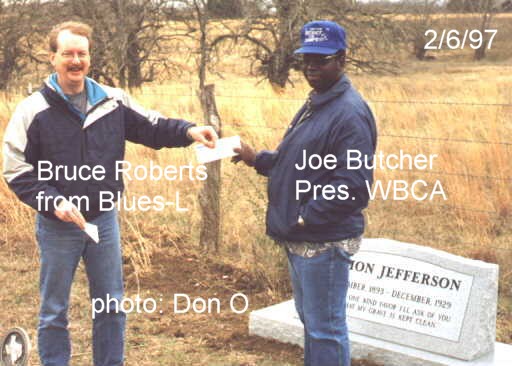 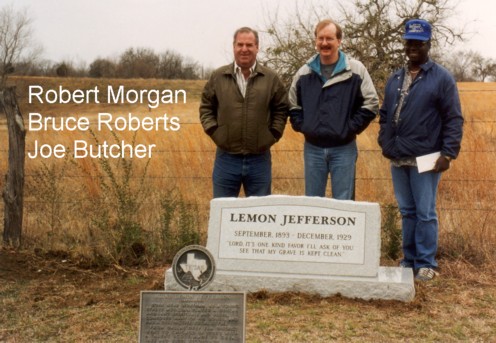 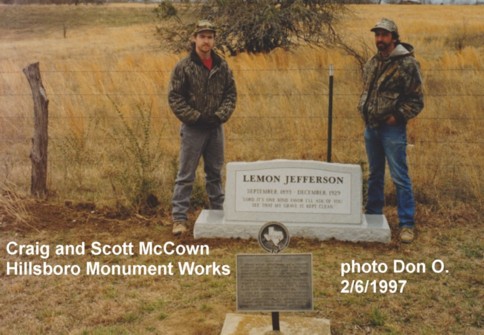 The inscription on the marker includes some lyrics from one of Lemon's most famous songs:

"Lord, it's one kind favor I'll ask of you. See that my grave is kept clean."

The marker was dedicated with a small ceremony at the old Wortham Negro Cemetery on Saturday, September 13, 1997. Officiating were two distant relatives of "Blind" Lemon, Reverend Curtis Jefferson Jr. and his father Curtis Jefferson Sr. They were joined in the ceremony by Elder Davis who led the group in song and prayer. Approximately 20 blues fans from as far away as Austin, Dallas, and Houston attended. 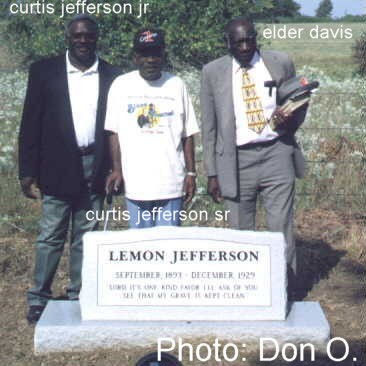 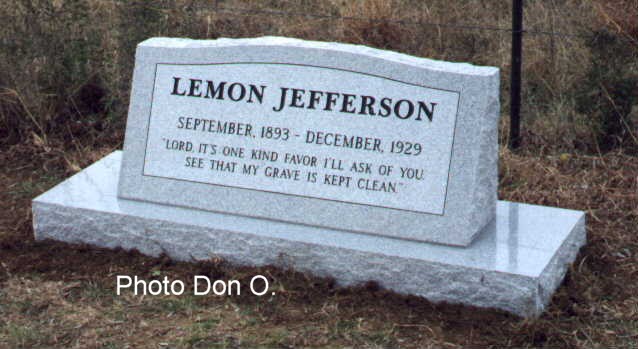 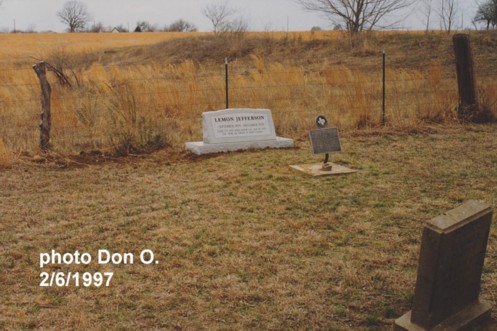 The city of Wortham also held a small blues festival in 1997 in conjuction with the dedication to honor their most famous son. Several bands performed on a small stage in downtown Wortham and at several venues in the area.  The fest continued off and on for several years following. 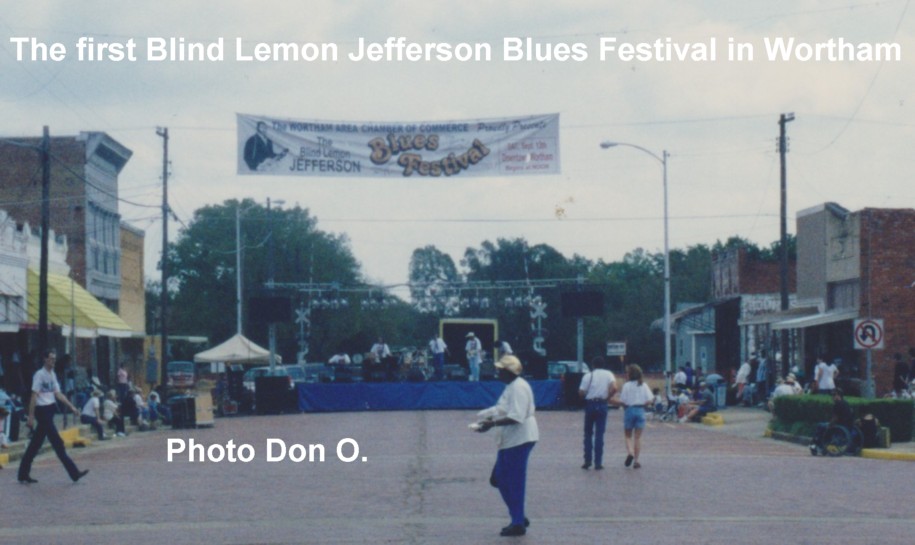 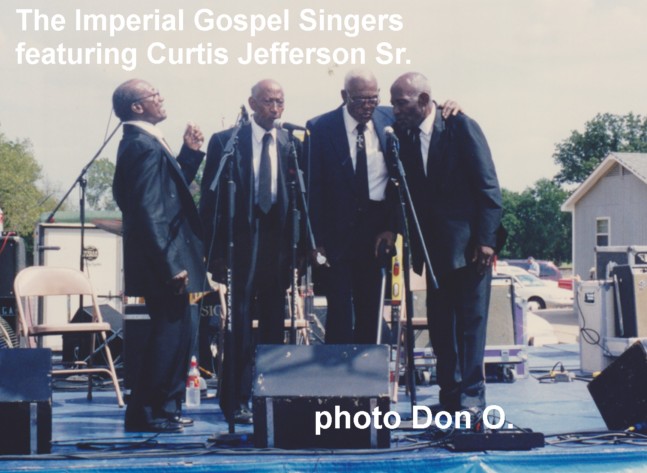 In 2002, the State of Texas honored "Blind" Lemon with a specialty license plate. 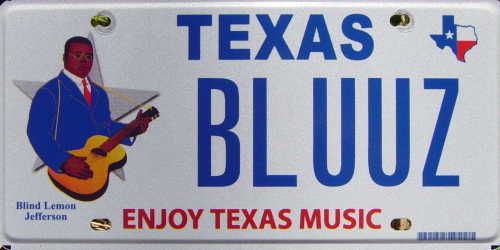 Joe Butcher passed away in 2010.  He did a wonderful job of updating and caring for the cemetery and added the new gate and signage that makes the cemetery so easy to find today.  Here are some photos from a visit to the cemetery in 2010.   http://bluesdfw.com/sub1/bljvisit2010.html